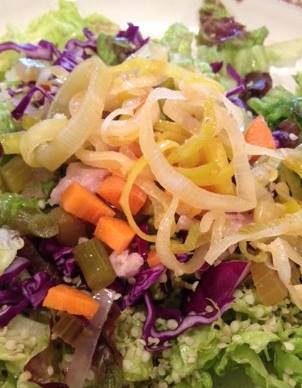 1. Wash your hands well before starting this recipe because you’ll be using them to mix everything together.

2. Rinse the leeks very well. Soil tends to get stuck in between the layers at the part of the leek where the dark leaves begin to branch out.

3. Thinly slice leeks (including some of the green tops) and place into a large bowl. Sprinkle the salt on top. Use your hands to massage the leeks and salt together until the juices begin to release (about 5 minutes). Cover the sliced leeks and allow them to rest for about 45 minutes so the juices continue to release. 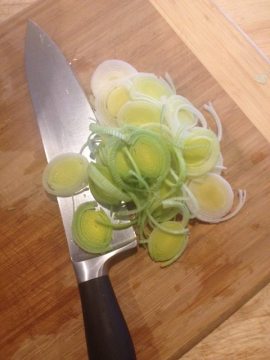 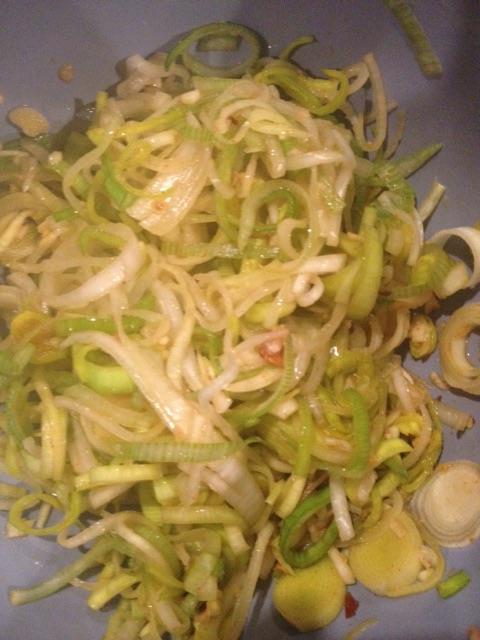 5. Press the leek mixture into a clean jar big enough to allow for at least 2 inches of space above leekchi. Press 1-2 clean green leek leaves on top of the mixture to seal and keep them submerged under liquid. You’ll want to compress the leeks down to remove all air pockets and to encourage their juices to rise to the top.

6. Leave your leekchi at room temperature, away from direct sunlight for about 1 week. The contents may bubble and seep out so you may want to keep your jars in a flat container.

7. After about 7 days, the active part of the fermentation should be complete and you can move your jar to the fridge where they will keep for about 6 months.

Like garlic, leek’s therapeutic effect comes from its sulfur-containing compounds, such as allicin. Allicin is not only anti-bacterial, anti-viral and anti-fungal, but research has revealed that as allicin digests in your body, it produces sulfenic acid, a compound that neutralize dangerous free radicals faster than any other known compound.

Leeks contain notable quantities of vitamins A and K, along with healthy amounts of folic acid, niacin, riboflavin, magnesium, and thiamin. Adequate intake of leeks during pregnancy may help prevent neural tube defects in newborns. B vitamins in leeks, in particular, may support heart health by keeping levels of homocysteine in balance (elevated levels of homocysteine are associated with heart disease, blood clots, and stroke).

Leeks also provide a concentrated source of antioxidants, even when compared to other antioxidant-rich foods.